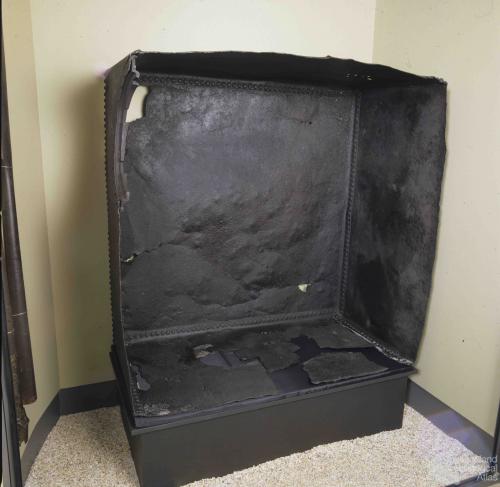 Mary Watson, her infant son and Chinese servant Ah Sam escaped an attack by local Aboriginal people at Lizard Island in 1881 by rowing away in this iron beche-de-mer tank. The small group survived eight days at sea before succumbing to dehydration.

This tank was used by Mrs Mary Watson to escape from Lizard Island in 1881 following conflict with local Aboriginal people.

Mary Beatrice Watson was born at Truro, Cornwall, England and arrived in Maryborough, Queensland in 1877. She later became governess to the Bouel children in Cooktown, and here she married Captain R. F. Watson, a beche-de-mer (sea cucumber) fisherman. Together they settled on Lizard Island 35 km off the coast of far north Queensland. In late September 1881, Watson’s husband was away on a fishing trip and she was left on Lizard Island with her infant son, Thomas Ferrier, and two Chinese servants, Ah Leong and Ah Sam when they were involved in a conflict with local Aboriginal people. One of the servants was speared by Aboriginal men, and the other wounded. After firing at the attackers with a rifle, they were forced to leave the island. On 3 October, with no boat, the three survivors rowed away from the island in this cut-down iron tank used for boiling beche-de-mer. They made landfall on one island after another, but failed to find any water. All three died of thirst between 11 and 12 October on Howick No 5. The island was later renamed Watson Island in her memory. Mrs Watson left her diary in her hut but maintained a makeshift diary up to the day of her death. It, along with her bible, was discovered with her body. Both diaries are now held in the John Oxley Library, while the bible is in the Queensland Museum.

Acquired by Queensland Museum in 1882