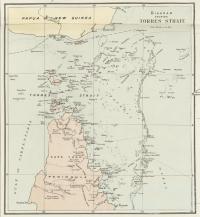 There are over one hundred islands in the Torres Strait, whose area extends over 35,000 square kilometres, seventeen of these islands are inhabited. The north-western islands of Saibai and Boigu are within five kilometres of the New Guinea mainland and Queensland shares a common international border with the Western Province of Papua New Guinea. The high western islands, a continuation of the Great Diving Range include Thursday, Narupai (Horn), Muralag (Prince of Wales) Kiriri (Hammond), Moa (St Pauls), Kubin Badu and Mabuiag; the low coral cays of the central islands include Masig (Yorke) Warraber (Coconut), Poruma (Sue) and Iama (Yam); the volcanic landforms of the eastern islands include the Murray Group, Maer (Mer), Diwar and Waier, Erub (Darnley), Ugar (Stephens) and the northern group of alluvial landforms close to Papua include Boigu, Saibai and Dauan.

Over 30,000 indigenous Queenslanders have their roots not in the vast Australian continent but in this group of tropical islands in the dazzling turquoise reef strewn sea between Cape York and Papua New Guinea. North Queensland is the traditional home of a distinct indigenous community, the Torres Strait Islanders. A Melanesian people, the Torres Strait Islanders have separate cultures and traditions than the Aboriginal people of the mainland.

In 1958 Queensland government official Harry Hyndman, working for the Queensland Health and Home Affairs Department, moved to Thursday Island with his family and recorded life on this and surrounding islands with his Kodak slide camera. The Hyndman family also visited Bamaga, Weipa and Aurukun on the western side of Cape York Peninsula. The slides, all taken with a Kodak Retinette camera, show aspects of the health system in northern Australia, together with pearling, fishing and hunting in the Torres Strait, and the cultural life experienced by the Hyndman family in northern Australia in the late 1950s. Together the Torres Strait and Cape York Peninsula form a distinctive landscape and culture in northern Australia.

Girls on parade for church, Aurukun 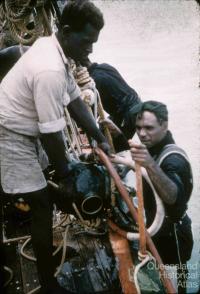