Environmental perceptions are seldom straightforward. From their first intrusions into the North Queensland rainforests in the mid-nineteenth century, European people have been both attracted and repelled, admiring the natural resplendence of the forests while yearning to transform the dank, dripping jungle into something more fitted for their own habitation. Environmental historian Kevin Frawley has identified three major strands of perception of the northern rainforests: aesthetic, utilitarian and scientific. One or another of these strands may have been dominant at a particular time, but all were woven – or tangled – together in the myriad ways in which European people have seen the northern rainforests.

Early European observers, like their counterparts today, were struck by the beauties of the rainforest. George Elphinstone Dalrymple, who led the first systematic explorations of the North Queensland rainforests in 1873, extolled their beauty in purple prose infused with a late Romantic sensibility. The adventurer-explorer Archibald Meston rendered the rainforest still more lavishly. Reporting on his 1889 ascent of Mount Bellenden-Ker, Meston wrote that he:

stood entranced in the presence of this magnificent and wonderful scene, that rivals in its living reality all that Romance, the ‘parent of golden dreams’, ever pictured in the fancy of the poet and the painter.

Other colonial commentators, like the visiting Norwegian zoologist Carl Lumholtz, wrote less lushly, but still expressed admiration for the natural wonders of the rainforest. They also conveyed the clear message that while the rainforests were beautiful to behold, they were not a nice place to live in.

Alongside aesthetic appreciations of the rainforests, these early observers expressed decidedly utilitarian aspirations. Dalrymple saw not only the beauties of the rainforest; he saw through the trees, into the soil beneath. In line with the scientific wisdom of the day, Dalrymple interpreted the luxuriance of the forests as indicative of the richness of the soil, hence its potential for tropical agriculture. Queensland’s Colonial Botanist, Walter Hill, who accompanied Dalrymple on his 1873 expedition, agreed. Their published accounts of the trees and soils of the coastal rainforests inspired first cedar-cutters, then farmers, to exploit the resources of the valleys of the Johnstone, Daintree and other northern rivers.

Walter Hill and his successor as Colonial Botanist, Frederick Manson Bailey, were advocates of what we would today call ‘wise-use conservation’. While encouraging the transformation of rainforest lands into agricultural landscapes, they urged that the transformation be carried out in an orderly and regulated manner, integrating as much as possible of the earlier vegetative environment into the new regime under cultivation. Against this stood a popular assumption that the resources of rainforest lands were boundless. The latter, combined with a governmental commitment to an ideology of closer settlement, led to large-scale clearance of the forest and frequent squandering of its timber and other resources.

Late-nineteenth century scientists tended to see rainforests as vast assemblages of discrete species rather than in terms of the interrelationships among them. It was a view that meshed with the prevailing utilitarian ethos. From the early twentieth century, ecological understandings of the rainforests were advanced, growing in prominence after the 1940s especially through the studies of CSIRO scientists Len Webb and Geoff Tracey. Emphasising the interdependence of all living things, ecology encouraged respect for the natural integrity of the rainforests and demands for their preservation. It was primarily for their ecological importance and biodiversity that the Wet Tropics of Queensland were inscribed on UNESCO’s World Heritage list in 1988 although aesthetic values also figured prominently among the criteria for listing.

As early as 1889 Archibald Meston predicted that the rainforests near Cairns would soon attract hordes of scenery-seeking tourists – though only to lament that ‘the tourist Goths and Vandals’ of the future would despoil the place by strewing ‘their abominable sandwich wrappers, and infernal rum bottles over this splendid picture in the art gallery of Nature!’ Tourists – with or without their litter – soon came. Opened in 1891, the railway from Cairns to Kuranda, which snakes up rainforest-clad mountains, across gorges and waterfalls, quickly became a tourist drawcard. By the early twentieth century the Queensland government was promoting the northern rainforests as tourist attractions and numerous entrepreneurs found new ways to convert rainforest into profit. While tourist promotional material was framed within a romantic aesthetic emphasising the grandeur of nature, the tourist industry flourished best after the rainforest had been tamed, reduced to patches interspersed among farms and towns.

Tourist operators sought to preserve the more scenically spectacular bits of the rainforest, but others held more ambitiously preservationist agendas. The North Queensland Naturalists’ Club, founded in 1932, advanced ethical as well as aesthetic and scientific arguments for the conservation of the ‘natural heritage’ of the region’s rainforests. The ethical imperative intensified with the rise of a global Green movement in the 1970s. Claiming the world’s rainforests to be in a state of crisis, Green activists insisted that tropical rainforests should be valued not so much for their attractiveness or usefulness to human beings as for their intrinsic worth as ‘wilderness’. In North Queensland, the advent of this new Green ideology was dramatically played out in the 1983-84 blockading of a road which was being pushed through the Daintree rainforests.

From the mid-nineteenth to the mid-twentieth centuries, the North Queensland rainforest was considered an ‘alien’ flora which had recently (in geological terms) invaded from Southeast Asia and was unrelated to the ‘genuinely Australian’ sclerophyll vegetation. This was a simplification of the theories propounded in the 1860s by the leading British botanist, Joseph Hooker, but it took root in Australia at a time of growing fears of another – human – invasion from Asia. In the second half of the twentieth century, under the combined influence of ecological studies and the theory of continental drift, the ‘alien invasives’ interpretation gave way to the idea that Australia’s rainforests were an ancient flora with a lineage going back to a time before this continent had separated from Gondwanaland.

While the northern rainforests were indigenised by being embedded in deep geological time, they were Indigenised in another sense through increasing attentiveness to their Aboriginal heritage. Rainforest Aboriginal people and cultures had long fascinated European observers. Dalrymple and other observers of the rainforest encountered many Aboriginal people and as early as the 1930s, a tourist enterprise known as the Malanda Jungle staged displays of Aboriginal skills and culture, performed by local Mamu and Ngadjon people. From the 1970s, popular interest in seeing the rainforest as an Aboriginal environment flourished, and at the same time local Aboriginal people began to assert control over how their relationship with the rainforest was projected to a wider audience. Founded in 1987, the Tjapukai Aboriginal Cultural Park north of Cairns has conveyed to millions of Australian and international tourists the message that aesthetic, spiritual and utilitarian appreciations of the rainforests are not an exclusively European preserve.

Carl Lumholtz, Among cannibals: an account of four years’ travels in Australia and of camp life with the Aborigines of Queensland, London, John Murray, 1889

Archibald Meston, Report of the Government Scientific Expedition to Bellenden-Ker Range upon the flora and fauna of that part of the colony, Brisbane, Government Printer, 1889 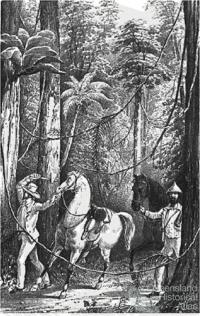 Cutting through the scrub, 1848 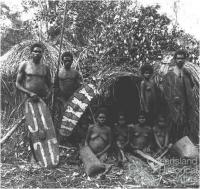 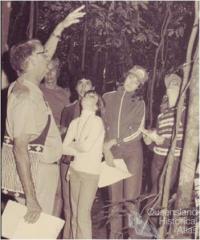 Len Webb and students at the opening of the Tully State High School Rainforest Reserve, 1982 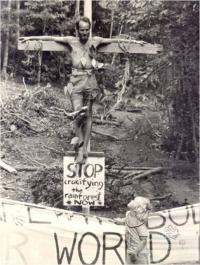 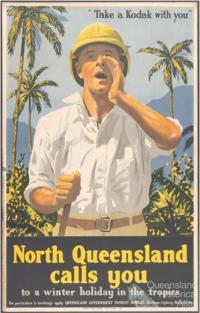 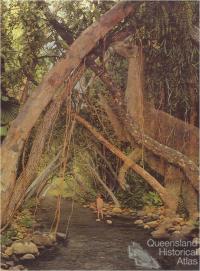 I pretend it is a hundred million years ago, 1987
Queensland: the slogan stateWalkabout