‘Youth’ has plagued Queensland, and in particular the State capital Brisbane, for at least a century. From Kangaroo Point’s ‘Larrikin Push’ of 1902 to modern concerns over alcohol-related violence in local nightspots, it seems that Brisbane has been unable to escape the untamed spectre of its young people. The city experienced a postwar explosion of youth subcultures, extending from the avant-garde artists around the Brisbane State High School based journal Barjai in the 1940s to the musical explosion of rock’n’roll and the working class subculture of bodgies and widgies during the 50s, particularly around Festival Hall.

What these various activities reveal, despite their differences, is a bohemian tradition reinventing itself through time. The urban landscape was vital to such a tradition. Activists constructed geographically bound ‘maps of meaning’ in urban spaces and locations from where to organise and live differential lives, free from the strictures of Brisbane’s sometimes stagnant political-cultural scene. These often scandalous activities attracted their fair share of enemies – generally in the form of moralising politicians, panicking parents and gossip-hungry newspapers – who sought to end such indecent behaviour in the name of public order.

Development of a New Left

The 1960s saw young people influenced by the global ‘counterculture’ and the student-led New Left take a decidedly political turn, seeking to emulate these examples in Queensland’s unpromising political and social setting. Dan O’Neill, radical English Lecturer and New Left leader, noted in the 17 March 1969 issue of student newspaper Semper Floreat that ‘a number of independent sources of social criticism’ emerged upon campus during 1966, throwing off the normalising, apathic and conservative politics of the cold war era. One of these sources, based largely on the University of Queensland’s St Lucia Campus and including such young undergraduates as Brian Laver, Mitch Thompson and Di Zetlin, borrowed their ideas – as well as their name – from the American ‘Students for a Democratic Society’, calling themselves Students (later Society) for Democratic Action (SDA).

The group’s ideas of participatory democracy and society-wide critiques of ‘liberalism’ and ‘the corporate state’ appealed to those seeking to comprehend the war in Vietnam and other global machinations of power. However, this transnational association did not blind activists to local political realities, with the Commonwealth’s 1965 decision to conscript young people for Vietnam and the Queensland State's denial of the unhindered right to assemble in a public place under the Traffic Act 1949 (initially introduced under the 1931 Railway Strike and Public Safety Act) forming an important, and interrelated, activist axis. Realising that these matters would best be fought over in the centre of the metropolis than suburban St Lucia, campus radicals took the step of moving their operations into the city proper.

‘Australia’s most evil and repugnant nightspot’ – the Foco Club

One such example of this intrusion of ‘gown into town’ was the establishment of the Foco Club on 3 March 1968 on the third floor of Trades Hall at the top of Edward Street. Taking its name from Che Guevara’s theory of localised guerrilla conflict, Foco was billed as an attempt to ‘interest young people in this state as to how enjoyable a combination of culture and entertainment can be with only a little imagination’. The club began as a joint venture of SDA – who provided the idea and most of the personnel – and the youth branch of the Communist Party, whose leadership of the city’s Trades and Labour Council provided a location steeped in the history of class conflict. Described as a multimedia extravaganza by one former patron, the club mixed popular rock’n’roll acts with poetry readings, radical films, a large book and poster display along with worldly political discussion, shining like a beacon on Brisbane’s otherwise stagnant Sunday night entertainment calendar.

Foco offered a space for unencumbered cultural expression, permeated with an anti-authoritarian and anti-imperialist politics. Its bookshop sold beads, sandals and other countercultural paraphernalia along with copies of How Not to Join the Army, Australian Atrocities in Vietnam and the weekly paper of the Cuban Communist Party – a controversial selection in highly-censored 1960s Australia. The club’s resident DJ ‘doubled as a lecturer on pop music’s relationship with modern art and culture’, while on occasions the already blurry distinction between cultural and political activity would break down completely. The Foco Vietnam Environment, for example, incorporated ‘film, theatre, music, painting … architectural structures … anything which can be used to explore the central theme’ of the ongoing conflict in Indochina.

Such a public appropriation of space for radical ends was destined for a short lifespan. Attacks from government, including the description of the venue as ‘Australia’s most evil and repugnant nightspot’ by Federal politician Don Cameron saw patronage decline, while a dispute over a student-led demonstration at May Day in 1969, where Gough Whitlam was accosted with a red flag, saw Foco’s ties with the trade unions permanently broken.

‘A dangerous place’ – the Red and Black Bookshop

If Foco operated as a drawcard for youth in an otherwise uninspiring entertainment landscape, then the Society for Democratic Action’s contemporaneous bookshop, named Red and Black, sought to add to local radicals’ ‘map of meaning’ through providing a politicised location for more routine organising. Located in the now flattened Roma Street Markets for much of its life, Red and Black carried on an earlier tradition of radical centres such as ‘SDA House’ in Highgate Hill. Suburbs like West End, Taringa and Toowong were favoured by radical students who would turn the kitchens or living rooms of the ‘timber and tin’ Queenslanders they shared into part-time activist centres for relaxed political discussions or social gatherings. The shop, and its attached organising space ‘The Cellar’, were however perceived in a different light by the SDA leadership, who saw the location as ‘the work centre of the radical movement which, if it challenges the basis of the capitalist society, must of necessity have a momentum of its own and an independent infra structure’.

Stocking a wide selection of New Left authors, from Frankfurt School Marxist Herbert Marcuse to radical humanist Erich Fromm, the bookshop offered a place for reading and political discussion not otherwise available in Brisbane. It was an alternative nightspot to Foco on Friday and Saturday, often using similar acts, as well as hosting many of Foco’s workshops during the week, ensuring the two locations constituted a vital activist nexus. The space’s notoriety as the headquarters of Brisbane’s youth dissenters, as well as its unfortunate proximity to police headquarters, soon saw it become a target. One police riad on 4 July 1968 saw $6000 dollars worth of damage to the building, while several activists recall the space as being the target of neo-Nazi attacks. The location was eventually abandoned for a position on Elizabeth Street after the shop suffered severe water and smoke damage from a fire in a neighbouring shop.

These 60s youth radicals – whether interested in drugs, music, ultra-left politics, or a fusion of all three – continued a bohemian tradition in some of Brisbane’s unused or marginalised spaces. The bookshop and the social club were radical bastions from where to attack conservative authority or to engage in activities considered taboo. The continuation of this tradition through the 1970s and 1980s, via the Punk movement in particular, to the contemporary proliferation of ‘subcultures’ illustrates the continued importance of youth in Brisbane’s historical development. 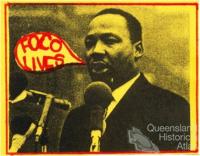 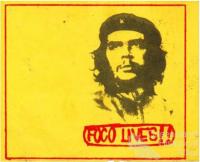 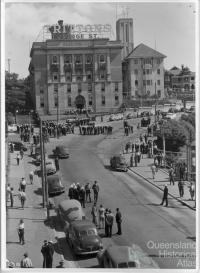 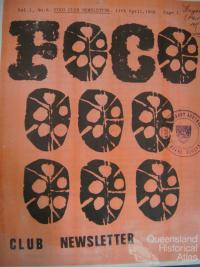 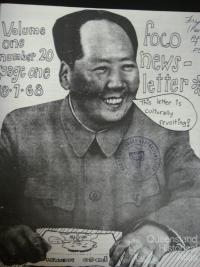 One time he came among us,

We the expresso folk,

Clad in his shroud of culture,

Amongst his self style serfs,

To us it seemed to say,

“How jolly good of me to come,

Thou I haven’t come to stay”.

A socialist is what I am,

I’ll have you all to know,

Just let me do my workers act,

Then I’ll be glad to go.

He sang the old “Lost Chord” to us,

Our hearts did bleed for his,

He couldn’t see the pitying eyes,

The expresso lights were dim.

To the tune of old ideas,

But through the cloak of mateship,

We glimpsed the snobbish fears.

Just as he sought to judge us,

We couldn’t quite accept his gall,

Nor his academic whim.

He fled before the bearded youths,

Could help him bridge the gap

That lies between progressive kids

So he doesn’t come among us now,

He things we are the push,

But we know he just can’t make the scene.

And once for a sort of a joke,

I went to drink Folk expresso there,

And watch the expresso Folk.

The coffee was just the same old stuff,

As you get in the posh caffays,

But something about the customers,

They had flowing beards, and flowing manes,

Tho they looked a bit down at heels

And they sang in moody and sankey tunes,

Of their wonderfully high ideals.

And it seemed quite clear they hadn’t heard

Of the daily bath as yet.

If it hadn’t been for the atmosphere,

I’d never have done such a thing,

But I went right up to the rostrum place,

I couldn’t locate the pianist,

But I gave em the old “lost chord”

Seated one day at the whats his name,

And golly how they encorded!

One of them wanted to tape my voice,

On a little machine he had,

And others told me I was quite unique,

And my song was authentic trad.