Whiteness in the tropics 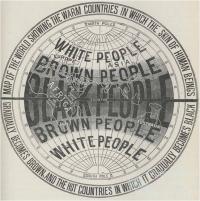 Map of the world showing the warm countries in which the skin of human beings gradually becomes brown, 1903

In the late nineteenth and early twentieth centuries, two visions of a white tropical Queensland vied for ascendancy. One was based on the principle of white dominance. It envisioned a society in which power and status would be concentrated in the hands of white people but with manual labour performed by an underclass of Asians and Pacific Islanders. The other was based on the principle of white exclusiveness. It looked forward to a tropical Queensland devoid of non-white people.

When British settlement first pushed beyond the Tropic of Capricorn in the mid-1850s, the former option seemed the more likely. Contemporary medical opinion held the tropics to be inherently and irredeemably unhealthy for the white race; ethnological science maintained that races outside their proper places risked degeneration; British experience in other tropical countries bore out these suppositions. North Queensland could be expected to develop along the lines of the plantation economies characteristic of other tropical colonies, with a minority of white people supervising a large coloured workforce. In line with that expectation, indentured coloured labour was imported into the north.

In the second half of the nineteenth century, a multi-racial, hierarchical society took shape in north Queensland. Whites stood at the apex; certain Asians (often Japanese, sometimes Chinese) on the next rung down; other Asians such as Malays and Javanese below them; Pacific Islanders next down; then Torres Strait Islanders, followed by Aborigines at bottom of the scale. Some degree of mobility between strata was possible; and providing each group acknowledged its rank in the hierarchy, a pragmatic racial tolerance prevailed. But white dominance was the keystone.

In the last decade of the nineteenth century this hierarchical social structure came under increasing challenge from the nationalist ideal of White Australia, according to which the entire continent should be peopled by whites only. Against the tenets of a white-dominated society, White Australia enthusiasts sought to reduce relationships of domination and subordination and thereby build a more egalitarian nation. Consistent with contemporary assumptions of inherent racial inequality, they insisted that racial diversity inevitably bred social discord and that social harmony demanded racial homogeneity. As evidence of the malignant consequences of racial diversity, they often pointed to North Queensland, disparaged in the 1890s by the nationalist Bulletin magazine as ‘Queensmongreland’.

The White Australia doctrine became closely connected with the campaign for federation. After federation in 1901, White Australia became the guiding star of the nation. There continued to be some who insisted that the White Australia policy could not apply to the north of the continent, where coloured labour offered the only viable means of economic development. However, early-twentieth-century white Australians evinced an increasing determination to meet the challenge of the north.

Aborigines did not figure prominently in debates over the racial destiny of the north, at least until the 1930s. Advocates of a white-dominated north focussed their attention on imported coloured labour, rarely referring to Aborigines despite the fact that they comprised the principal workforce for the northern pastoral industry. Medical scientists who argued for the viability of white tropical settlement were virtually unanimous in claiming that Aborigines posed little threat since, unlike the indigenous peoples of other tropical lands, they did not constitute a reservoir of exotic diseases. These scientists acknowledged that diseases were rife among Aborigines, but the flow of contagions was generally from Europeans (and Asians) to Aborigines, not, as was the case in other tropical lands, from the indigenes to the newcomers. Fears of contagion were certainly racialised in northern Australia, but for white newcomers the feared sources of disease were other – especially Asian – newcomers, not the original inhabitants. In any case, Aborigines could be left out of account since they were presumed to be fated to extinction in the near future.

Contemporaneous with the rise of the White Australia ideal, medical science made major advances in the diagnosis and prevention of tropical diseases, thus eroding the image of the tropics as intrinsically hostile to the white race. Yet misgivings remained, particularly over the vigour and reproductive powers of white women in the tropics, and the capacity of white men to sustain strenuous labour in a tropical climate. To investigate and alleviate these persisting impediments to the achievement of an all-white Australia, the Australian Institute of Tropical Medicine was established in Townsville in 1910 with Dr Anton Breinl as director.

In 1925 the new director of the Institute of Tropical Medicine, Dr Raphael Cilento, published The White Man in the Tropics, a paean to tropical whiteness and racial purity. White people, he insisted, had to make an effort to adapt to the tropics, in housing, clothing and diet; they must be vigilant in their personal hygiene and exercise self-discipline in their social interactions. Yet these, according to Cilento, counted as virtues anywhere and constituted no impediment to the attainment of an all-white north Queensland. Already, large numbers of white people lived there and Cilento discerned among them the evolution of a ‘tropical type’, distinct from southern Australians but still unequivocally white, with all the qualities – physical, mental and moral – presumed to inhere in whiteness.

Cilento’s tropical triumphalism was associated with a larger nationalist quest for a continent densely populated from coast to coast by whites only. The tropical north, in this vision, should be home to tens of millions of white people. This ambition had wide support in interwar Australia but also many detractors, none more combative than the geographer, Thomas Griffith Taylor.

Taylor’s opposition to dense white tropical settlement was based on two lines of argument. One was environmental determinism, Taylor arguing that the tropical north simply did not possess the physical resources needed to sustain a large population. The other – essentially a reworking of the old ‘races in proper places’ argument – was that the climate of tropical Australia inevitably caused severe discomfort among its white residents.

Taylor did not oppose white tropical settlement per se; indeed he considered parts of coastal north Queensland capable of supporting a reasonably numerous population. His opposition was rather to the quest for a profusely populated north – and an exclusively white one. Always a keen controversialist, Taylor’s most contentious proposal was for Chinese immigration into tropical Australia. This suggested defilement of the White Australia ideal drew savage criticism from press and public, the more so since Taylor suggested that once here, the Chinese should intermarry with white Australians.

Taylor’s originality lay in his pushing beyond the familiar terms of argument about tropical Australia. He advocated neither a white-dominated nor an exclusively white north. In his scenario, Chinese residents would be equal citizens with their white co-nationals. He also sought to deflate the optimistic assessments of prolific white tropical settlement that had burgeoned since federation under the inspiration – or intoxication – of White Australia enthusiasm. His arguments were not free of racist assumptions, but they marked the beginning a line of thinking about tropical Australia open to the possibility of its habitation by multiple races on the basis of equality.

Lyndon Megarrity, ‘“White Queensland”: The Queensland Government’s ideological position on the use of Pacific Island labourers in the sugar sector 1880-1901', Australian Journal of Politics and History, vol 52, no 1, 2006, pp 1-12 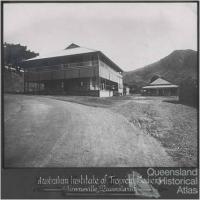 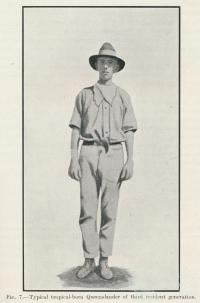 Sure proof of a white race living and thriving in the Queensland tropics, 1928 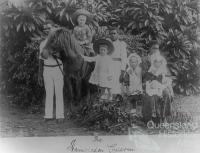