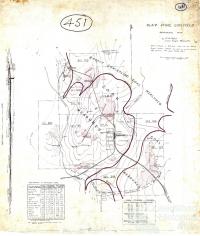 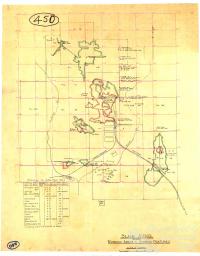 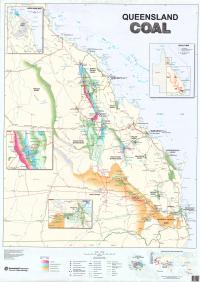 Queensland is the world’s third biggest coal exporter. The future may be very different, but the past, for coal mining, has been a rich web of human drama, holes and even bigger holes, massive landscape changes, and shipping off Queensland coal to destinations all over the globe.

A vein of coal

In 1825, almost a year after John Oxley, Edmund Lockyer was sent to the area now known as southeast Queensland to investigate the upper reaches of the Brisbane River. As part of the journey he was to report on the fauna and minerals of the region. It proved successful, as he reported in the Sydney Gazette of 20 October 1825 ‘a vein of coal is seen about forty miles above the settlement’ on the upper reaches of the Brisbane River. Following Lockyer other explorers – including Cunningham, Fraser and Logan – noted the importance of minerals, in particular coal, for the region.

Holes in the ground

Prior to 1880s coal mining was a relatively small insignificant industry. Most of the early mines were located at outcrops exposed by weathering and erosion. After this time, mining focused on the chief producing mines on the Brisbane River at Redbank, Goodna and Ipswich. At these mines there were two ways of extracting the coal: tunnel or shaft. Tunnelling involved digging straight into the seam and following its natural slope; this gave immediate access to the coal, but its quality was never as good. The shaft method sunk a vertical shaft straight down to the seam; this involved time consuming prospecting and constructing a timber-lined shaft up to forty metres deep, the coal, however, was of a much higher quality. Underground mining, either by tunnel or shaft, was the primary method of mining up until the mid-twentieth century, especially with the dominance of the Ipswich fields that were suited to this method.

There is a human cost for all the economic benefit. The major disasters in Queensland’s coal mining history happened at the Eclipse mine, Mount Mulligan, Collinsville, Box Flat, Kianga and Moura; not to be forgotten are the single or double fatalities that occur frequently in many mines. The Mount Mulligan coal dust explosion of 1921 which killed 75 miners was one of the most devastating industrial accidents in Queensland’s history.

We thank you for your kindness & for yours letters of sympathy. Some day I hope to have the pleasure of meeting you. The accident happened at 25 past nine on Monday the 19th of September and they got all the men out some on Monday Tuesday Wednesday Thursday and Friday. The explosion started up at the fan and then in the tunnel. the blacksmith shop got blown to bits. The man who was in the shop got blown 200 yds away from the tunnel and after the explosion they went down the [mine] and worked all night and day looking for the men Everyday the people used to have breakfast dinner and tea up at the mine.

Herbert would go on to become a coal miner. In June 1942, while working at Collinsville State Mine, he was killed in an accident.

Blair Athol: town to mine

Coal was found at Blair Athol, in what is now Central Queensland’s Bowen Basin, in 1864 when James McLaren, the pastoral owner of the area, sank a well on his homestead block. By 1910, the township of Blair Athol was born: it had a rail link with Clermont, a school, a hospital, and a cemetery. In 1919 in a discussion of the mines at Blair Athol J.F. Hall, a mining engineer, explained that to minimise wastage and ‘in the interests of the national economy’ the open cut method of mining should be introduced. Small-scale open cut techniques commenced in 1936, it was the first open cut coal mine in Queensland. In 1968, the Blair Athol field was bought by two big multinationals. Prospecting showed that the town was sitting right on top of the big seam; in this time a Japanese electricity company signed an enormous contract for Blair Athol’s steaming coal. The town had to be moved. In 1981 the last dance was held at the Blair Athol town hall; it was demolished soon after. All that remains of the Blair Athol town is the cemetery that is off the main road, surrounded by high barbed fences, leading to the current mining operation.

Poetry from the pit

Miners, or members of mining communities, have consistently used poetry to describe their interaction with coal. Of the hundreds of poems about coal in Queensland ‘The Coal Miners’ by Eric MacKenzie is an excellent example, comparable to the coal poems of great writers such as Franz Kafka and James Wright. The poem is not only insightful of life underground, but also of the metaphorical way coal is often used in literature. Interestingly, since the 1980s, and the shift to large-scale open cut mining, coal poetry has not declined, as some social historians argue, but has shifted its focus from nostalgic miner ballads to poets noticing huge landscape changes that open cut mining causes, for example the many poems about Blair Athol by Bernie Bettridge, R.G. Hay and Anne Lloyd.

The greatest impact of coal mining on the landscape is from enormous open cut mines that dominate the Bowen Basin. The open cut method of mining first strips away the top overburden layer covering the coal, then using a huge shovel, coal is scooped up and loaded onto huge trucks, these in turn load trains bound for the closest port, to be shipped overseas to countries such as Japan. Open cut coal mines create spectacular holes but show human’s ability to physically move and irreversibly change the landscape. The modern open cut mine is almost a different industry compared with the underground mine of the early years – the only similarity is the coal. The open cut requires different employees, different skills, and different unions. Today, everything is ‘big’ in the coal industry: big trucks, big buckets, big holes, big production, big profit, big landscape change; it is this ‘big’ vernacular that dominates the industry.

Peter Bell, If anything, too safe: the Mount Mulligan disaster of 1921, Townsville, James Cook University, 1996

They shuffle out, darkened by need,

a minstrel show of faces, fake.

nothing of the miners’ deeper pits

Not that I class it curious

among machines that fly and float

if man who rapes reality

what seems more natural to ants.

I used to think my mission

was in mining, unearthing all

the facts about myself … Alas

I show too many signs of

too conscious in my chair

A culture of exploitationCrocodile hunting