From whaling to whale watching

The relationship between Queenslanders and whales is a fascinating example of the rapid shift in government and public interests and expectations about the environment.

Until the later part of the nineteenth century and the discovery of mineral oils, whale blubber was the main source of oil for lighting and lubricants, with large fleets of ships from Europe and America hunting whales around the globe. While Sperm whales (Physeter catadon) provided the best oil, the semi-flexible plates from the mouths of baleen whales such as humpbacks (Megaptera novaengliae) and right whales (Eubalaena australis) was also prized for use as stays in clothing and even for the springs of coaches. Unlike the other colonies, the early European settlers in Queensland did not establish any shore-whaling stations on the coast in the nineteenth century. However, there was intensive activity in and around the Great Barrier Reef by foreign whaleships from the 1790s through to the 1870s, with over a dozen vessels wrecked on the coral.

Following World War II there was a renewed interest in whaling, with Whale Products Pty Ltd establishing a shore station at Tangalooma Point on Moreton Island.  Constructed and organised using Norwegian expertise, the station employed modern whale catching and processing techniques and was licensed to catch between 500 and 700 humpbacks per year between 1 May and 31 October. Powered chase boats were used to pursue the whales, guided to their prey by a ‘spotter’ plane. The whales were then shot and killed with explosive harpoon heads and the carcasses filled with compressed air before being towed back to the station for processing. During the whaling season Tangalooma operated 24 hours a day, flensing the whale blubber from the bodies and placing it into pressure cookers where the oil was extracted.  Once purified the oil was sold overseas for use in margarine and other food products. The rest of the carcase was ground into a meal for livestock food, while the baleen or ‘bone’ was cleaned for use by the fashion industry.

Life at the whaling station

Each season the Tangalooma whaling station employed over 150 men, working seven days a week for the five months of the season. The workforce was cosmopolitan, with expert Norwegian whalers flown in to captain the boats and manage the guns, as well as Aboriginal, Australian-born and migrant workers. Although well paid the work was hard and the station was isolated, with wives and children only allowed to visit on Sundays for several hours.

From 1952 to 1959 the Tangalooma station was able to secure its quota of humpbacks, although in the several years after this the decline in whale numbers meant they were far less successful. In August 1962 the station closed, having taken 6277 humpbacks during its 12 years of operations. Together with the 1146 humpbacks taken by the Byron Bay station in the same period, and an unknown number killed by Russian whaleships, the estimated post-war population of 10,000 east coast Australian humpbacks may have been reduced to only 100 animals. In 1979 Australia adopted an anti-whaling policy and supported the International Whaling Commission (IWC) moratorium on commercial whaling which came in to place in 1986.

Whales and whaling has always been of interest to Queenslanders, and even during the whaling period boatloads of tourists from Brisbane would call at the Tangalooma station to watch the whales being flensed.

Over the ten years the Tangalooma station operated, the Hayles Company vessels Mirimar and Mirana, brought thousands of day trippers from Brisbane to Moreton Island to see the factory and watch the whales being hauled up and flensed. Many remember the smell of the station and the blood-stained waters off the flensing deck, complete with cruising sharks.

After the close of the industry and with rising awareness of the environment there came a gradual emergence of the ‘eco-tourism’ market, although it was not until the late 1980s that organised ‘whale watching’ tours began to emerge in Queensland, with Hervey Bay and Moreton Bay being two of the most popular locales. The focus has been on the annual migration of the Humpback whales, mostly from August to November, whose curiosity and occasional aerial acrobatics are favourites of observers.

Since his first sighting in 1991, the unofficial mascot of the east coast whale watching industry has been a rare albino humpback whale, named Migaloo or ‘white fella’ in the Butchulla/Budjala language of Hervey Bay. Each year Migaloo has migrated from Antarctica along the eastern Australian coast and as far north as Hinchinbrook Island. As with other adult male humpback whales, Migaloo has been seen breaching, throwing almost two-thirds of his body from the water, and has been recorded ‘singing’ underwater, which may be associated with a mating call.

The Eastern Australian humpback population is recovering and is estimated to be over 5000, while each year whale watching cruises attract over 70,000 people and had evolved into a multi-million dollar industry.  The economic benefits of the shift from hunting to watching has also helped support the case for the continued moratorium on commercial whaling.

The data board, Tangalooma whaling station, 1960 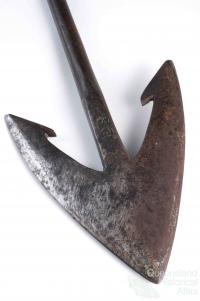