The 1967 Referendum – the State comes together? 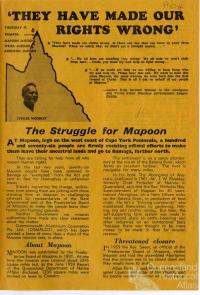 They have made our rights wrong, Mapoon
By:
Jon Piccini

The 27 May 1967 national Referendum was a turning point in Queensland’s political landscape, though not in the manner ordinarily conceived. Some 88% of the Queensland population heeded calls from a diverse coalition of Indigenous and non-Indigenous activist groups to ‘vote yes for aboriginal rights’ through making two small alterations to the Australian Constitution. This call for rights was particularly pertinent in Queensland – a state whose harsh protection regime and frequent dispossession of ‘native’ inhabitants in favour of mining or pastoral interests prompted comparisons with the American south, if not the Apartheid regime in South Africa.

While the Referendum is memorialised as a moment in time when Australia's Indigenous peoples at last achieved full citizenship, the victory built on a long campaign which had already won most of these rights. The vote also reveals division in the Queensland landscape. A strong rural-urban dichotomy and racialist overtones challenges the liberal myth of near-universal support. The victory also saw changing perceptions of government authorities by Indigenous activists, and consequential shifts towards more militant modes of protest such as ‘Black Power’.

Let’s have a referendum – the context of constitutional reform

Though part of a national campaign, the Queensland Branch of the Council for the Advancement of Aboriginal and Torres Strait Islanders (QCAATSI) and other like groups built on a tradition of local activism, providing a decidedly local tinge to proceedings. A year after activist Jessie Street launched a similar campaign in Sydney, 1958 saw the Federal Council for Aboriginal Advancement adopt a petition to change sections of the constitution that excluded Aboriginal people from the census and limited the ability of federal authorities to make laws on their behalf. QCAATSI was founded as a result of this, bringing together a variety of black and white groups ranging from the Cairns Aboriginal Advancement League to Brisbane’s Northern Suburbs United Nations Group.

The group’s constitution stated its intention to support the national referendum campaign while seeking the ‘acceptance of Aborigines and Torres Strait Islanders within the Australian Community on the basis of complete…equality’. This was a task made difficult by the State-based management of Indigenous affairs, with a FCAATSI leaflet explaining in 1963 how:

Queensland particularly ‘lagged behind the rest of Australia’ on Indigenous issues. One Indigenous woman remembers the period to have been ‘very confusing…we weren’t allowed to go into pubs, but in some places when I was with my (white) husband we used to be served and others refused to serve us’. Though the Aborigines and Torres Strait Islander Affairs Act 1965 had given the State’s Indigenous inhabitants the right to vote and consume alcohol off-reserves; freedom of movement, property and association were still strictly controlled. ‘The basic philosophy of this act’ a QCAATSI leaflet articulated, ‘seems to be that the Aborigines it covers must be closely controlled by the Department…no meaningful form of self determination is permitted’.

Almost all 'yes' campaingers sought federal government action. Jessie Street argued in 1957 that ‘the people must be lifted out of their misery and only the Commonwealth can do it’. Convincing Queensland’s population that Federal intervention would be beneficial to the State was vital to campaigners, who feared a ‘state’s rights’ campaign similar to that waged by the West Australian newspaper, which claimed that the ‘double-barrelled’ referendum could ‘bring interference in State affairs’ due to the undefined nature of the powers under consideration. Concerns were amplified by the inclusion of an unpopular question seeking to refashion relations between the lower and upper houses in federal parliament, which Queensland DLP leader Vince Gair (a deposed Labor premier) and others were campaigning strongly against. One prominent argument was financial, with a pre-referendum leaflet explaining how ‘unlike Western Australia, Queensland is not an aided State, therefore receives no rebate from the federal government for money spent on aborigines’. Undercounting in the census was another factor: QCAATSI campaign literature claimed ‘through under-estimation of its population, Queensland will lose some half million in taxation reimbursement’. Political campaigning around the Referendum was also sparse on details, instead focusing on variations of a ‘vote ‘YES’ for Aboriginals’ theme, which sought to conflate two rather minor changes to the constitution with a ‘new deal’ for Indigenous Australians.

With the end of the Menzies' conservative government and the more accommodating Holt administration taking over, rallies and public advocacy calling for a referendum were heeded and a vote was set. Queensland’s Labor and broader trade union movement played an important role in the Referendum’s victory, as it had done in previous struggles, with unionist and FCAATSI head Joe McGinness explaining in Son of Alyandabu in 1991 how ‘without the support of trade unions and a few parliamentarians who believed in the principle of a fair go’ it was unlikely that Indigenous matters would have received such public traction. Labor’s Manfred Cross played a key organising role in the Queensland Referendum campaign, using his Brisbane electoral office as its base, while the TLC provided the weight of its membership and influence.

On voting day, Queensland registered the third highest ‘no’ vote overall, as well as hosting three of the five highest ‘no’ voting townships, despite both State and Federal governments generally supporting the campaign and the lack of a clear policy position for the ‘no’ case. Some have noted the correlation between rural location and proximity to large Indigenous, usually reserve-based, populations as key to high ‘no’ voting. These factors dovetail in the case of Georgetown, the only township in Australia to score a majority ‘no’ vote – whose isolation on Cape York and proximity to a large Aboriginal reserve – bolstered what have been described as ‘racist’ voting patterns. Queensland’s media either supported the vote wholeheartedly or ignored it, as was the case of the Charters Towers Northern Miner, based in an electorate which recorded the nation’s second-highest ‘no’ vote. Overt dissent was occasional, such as a letter to the Courier-Mail published on May 26 claiming that the vote would lead to a ‘blossoming of so called ‘civil rights interests’…as in the USA where they are using the negro as the raw material for racial upheaval’. Another Brisbane resident suggested in The Australian on the same day that Commonwealth legislation on Aboriginal affairs ‘opens the door to discriminatory legislation of the South African kind’. Wide support for reform in urban centres, however, bolstered Queensland’s rural vote – 7.77% lower than the urban average.

Reaction to this historic mandate was lukewarm at both State and Commonwealth levels, with a small ‘Office of Aboriginal Affairs’ set up by Canberra several months later, while Queensland felt no compulsion to quickly alter its discriminatory policies. QCAATSI’s membership saw the victory as a step in the right direction, with Secretary Kath Walker (Oodgeroo Noonuccal)  in 1968 extolling ‘the truth of Manfred Cross’s words that 'winning the referendum was a good start'. Local writer Rodney Hall recorded that the response of ordinary Indigenous people to this symbolic victory was great:

There were black people on the streets in a way that we had never seen them…It was so touching. People were up, had washed their children, combed their hair and got themselves up in their very best gear and walked out in the streets of Brisbane, down Queen Street where they never went.

Such enthusiasm seems however to have been short lived. Initial euphoria gave way to pessimism and outright hostility from Indigenous youth who began to embrace Black Power – imported from the United States – in response to official inaction and entrenched racism. The perseverance of restrictions under Queensland law saw an Act Confrontation Campaign established in 1970 with the militant demand of ‘Smash the Act’, while Indigenous youth formed a Brisbane chapter of the Black Panther Party in 1972. This group’s first manifesto of 28 January 1972 spells out a new generation of activists’ rejection of 1950s and 1960s liberalism, for ‘although the Federal Government has power to override the State it has refused to do so…prov[ing] that it is impossible to work through this present system to alleviate Racism’. It was, after all, a decades long campaign by Indigenous people themselves that won eventual change. As Jackie Huggins wrote in 2007, ‘the job may have been finished in the parliament and with a vice-regal signature but the real work was done in kitchens and workplace cafeterias, camps and community halls’.

Contemporary understandings of the Referendum campaign amongst Indigenous Australians show its diverse impact on the political landscape. Cairns resident Ray Wallace, nine years old at the time of the Referendum, believes that it ‘opened ‘the door’ on Aboriginal and Torres Strait Islander people’s basic rights’ – illustrating the power that this symbolic victory continues to hold on the collective imagination. From another perspective, Brisbane Indigenous woman Emily Walker, who was 29, doesn’t believe ‘that the referendum changed anything’, elaborating that ‘anything that the government did, didn’t achieve anything…they did all the wrong things’.

The vote, irrespective of government inaction at the time, still carries a certain potency, with prominent Queensland Indigenous leader Noel Pearson writing in the Griffith Review how the vote ‘marked the beginning of a new era in Indigenous history and policy. It was a hopeful and positive event, and is still mostly seen as such’. In a 2007 article for The Australian, Pearson described the insistence of Palm Island residents for a Federal investigation into the death in custody of Mulrunji Doomadgee as an ‘angry insistence that Australia delivers on the promissory note of the 1967 referendum’ – illustrating the vote’s continued political currency. Former Referendum campaigners also hope that the victory can provide lessons and challenges to those agitating for change today. As Brisbane academic Jackie Huggins relates, ‘they want to convey to young Australians that a lot can be achieved when you tap into the best in people. Frankly, they also want to give a whole lot of people a kick up the backside and tell them to get on with it’. The struggle, after all, isn’t over yet.

‘The 1967 Referendum: the struggle for a new deal for Indigenous Australians’, online exhibition, Fryer Library, University of Queensland compiled by Jeffrey Rickertt http://www.library.uq.edu.au/fryer/1967_referendum/

Susan Taffe, Black and white together: FCAATSI: the Federal Council for the Advancement of Aborigines and Torres Strait Islanders, 1958-1973, St Lucia, University of Queensland Press, 2005 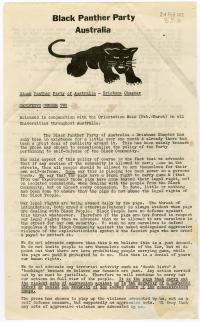 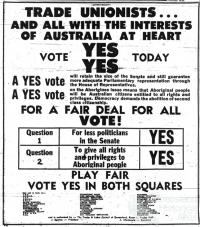