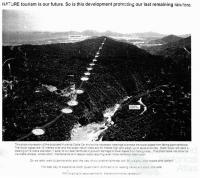 Nature tourism is our future, 1994
By:
Rosita Henry

During 1993 and 1994 the Cairns to Kuranda Skyrail became a hot political issue in North Queensland. The responses of the local community to the construction of this passenger cable car through the Barron Falls National Park and the newly listed Wet Tropics World Heritage Area, were varied but quickly became polarised as being either for or against the project. The Skyrail became a heated topic of debate in both the private and public domains, in the homes of local people, in the cafes and bars and other meeting places, eventually spilling out into the streets in the form of demonstrations, and into the rainforest itself in the form of the blockade and direct action by some of the protesters. Developers proposed the construction of a 7.5 km long cableway in the rainforest from Caravonica to Kuranda called Skyrail, the first commercial development in a World Heritage listed area.

The Tjapukai Aboriginal Cultural Park was born during a period of political unrest in Kuranda over the construction of the Kuranda Skyrail. Djabugay people joined forces with environmentalists over the issue of damage to rainforest and the granting of leases by the government in the National Park. A Native Title application was lodged and Aboriginal people joined protest marches and a blockade in direct action against Skyrail.

After the implementation of some construction compromises, the Skyrail opened to the public in August 1995. 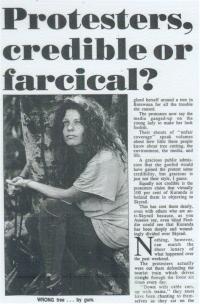