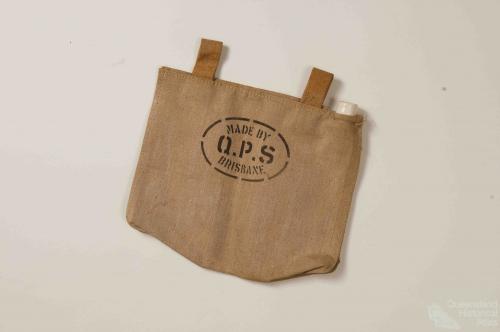 This hessian water bag was manufactured by Queensland Pastoral Supplies Limited (QPS) in Brisbane. QPS was distributing water bags and other equipment and supplies for pastoralists from the 1920s through its mail order catalogue throughout Queensland and the Northern Territory. The company operated well into the 1960s with its diversity of products including pre-cut timber housing. Canvas and hessian water bags were used in Australia from at least the mid-nineteenth century. Once the bag was wet the water was retained inside and the effect of evaporation would keep the water cool. In the twentieth century the full water bags were often suspended on the front of motor vehicles to aid in the evaporative cooling process while driving along. The water bag belonged to Mr Leslie Edward Skinner, a senior Queensland public servant in Indigenous Affairs and Crown Solicitor in the 1950s and 1960s.