Queensland is governed from a state capital located a great distance from the majority of its land area.

Before the Aboriginals Protection and Restriction of the Sale of Opium Act 1897 was introduced, many Aboriginal people lived within the boundaries of their own ‘country’ according to cultu

Asylums in the landscape

For more than one hundred years Queensland’s main mental health facility was based on the banks of the Brisbane River near Goodna. 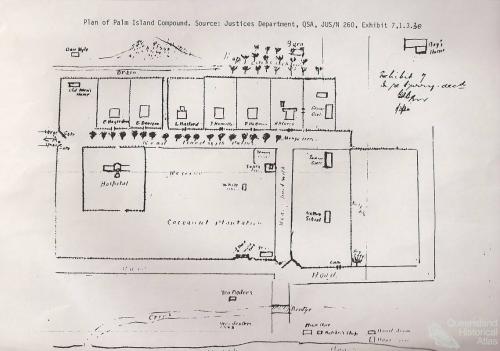 Map of Palm and Surrounding Islands, 1941

Map of Palm and Surrounding Islands, 1941. Lands Office, Palm Island Bundle. Collection of Queensland State Archives. Palm and surrounding islands.  Fantome’s lock hospital for treatment of venereal disease was positioned opposite Palm’s Coolgaree Bay. The lazarette for leprosy sufferers were positioned at the opposite end.

Palm Island is situated in north Queensland, 65 kilometres northwest of Townsville, in Halifax Bay. It is the largest Indigenous community of Queensland. 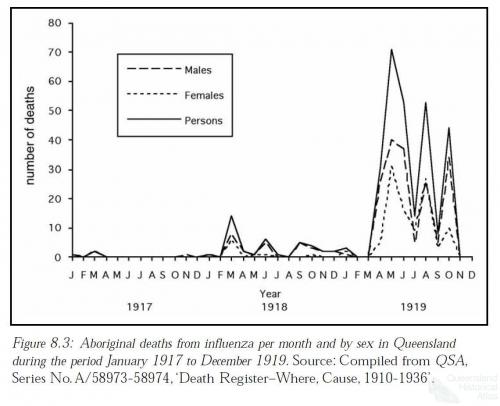 Of the estimated 12,000 deaths in Australia from the Spanish or pneumonic influenza in 1918-19, 1030 were Queenslanders, 315 of whom were known to be Aborigines, representing 30 per cent of the State death toll.  In Queensland, the pandemic had arrived first at the main seaports of the middle and southern coast and had then moved inland to urban and rural regions. Initially, it affected white people then began affecting Aborigines, coming for them on top of an epidemic of pneumonia.

Hospitals in the landscape

'Those in the town were apathetic as to what happened in the bush, and the people in the bush knew no better, and were content to leave things as they were.