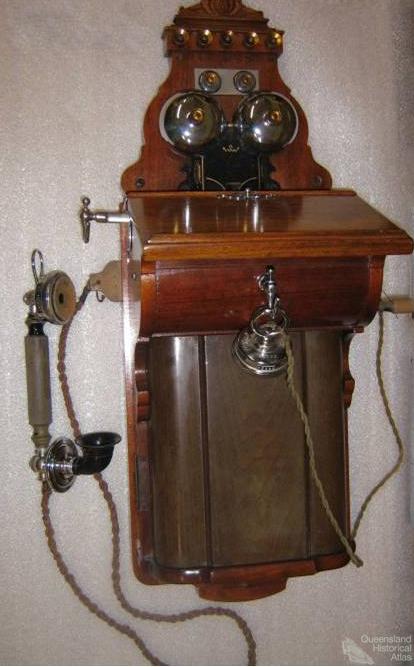 The first telephones used in Brisbane were imports from the USA, namely Edison-Bell and wall telephones (Edison Carbon transmitter and bell with a Bell receiver or telephone) and were adjusted to local needs and demands. The first telephones were housed in wood, especially susceptible to cracking in hot and dry regions. The electronic components also had to be adjusted, as the original models had not been designed to serve long distance connections. With the growth of the Australian market subsidiaries of multi-national companies settled in Australia. The technology was often transferred from parent companies and designs increasingly incorporated features required for Australian use. The types of phones being used in Queensland were highly influenced by the general technological development of telecommunications throughout the world including the automatic dial system, and the invention of Bakelite and acrylics. Mass production enabled many Queenslanders to get access to functional and cheaper telephones in the second half of the twentieth century:  For a long time the consumers’ decision about individual phone model was constrained by the facilities of the local exchange and bulk ordering by the PMG. Many different types of telephones (magneto, central battery or automatic style) were in use at the same time in different areas in Queensland.

The forces and influences on the actual design of telephones can be related to both aesthetic and practical reasons. Before 1900 Australian telephones were large to encase the large batteries and also served as decorative furniture. In the following decades, as technology became available, telephones became more practical, and, with the invention of the Central Battery System, much smaller. A new design appeared in the 1920s with the introduction of bakelite. Curved and sweeping shapes could now be moulded. After World War II plastics were commonly used in the production of telephones.

Collection of the Queensland Museum