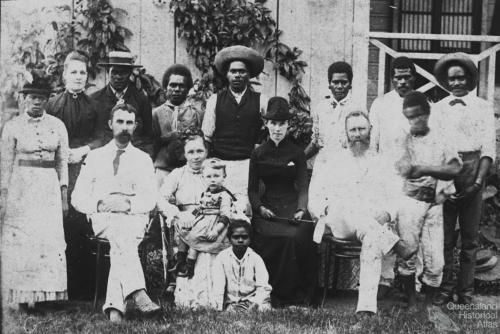 The Swallow family and members of their staff at Hambledon Sugar Plantation outside Cairns, c1889. The situation at Hambledon was typical of the large plantations established in north Queensland in the second half of the nineteenth century. Hambledon’s staff included Europeans, Chinese, Japanese, Javanese, Pacific Islanders, Aborigines and probably several other ethnic groups. In late nineteenth century north Queensland, privileged white children were typically raised partly by non-white workers. Collection of John Oxley Library, State Library of Queensland.

From 1863 Pacific Islanders were recruited as indentured labourers mainly for the northern sugar industry. They were to play a major role in building a white-dominated, multi-racial tropical Queensland. Supporters of the labour trade such as Thomas McIlwraith, Queensland premier from 1879 to 1883, explicitly stated that its purpose was to ensure the success of white colonisation, white industry and white residence in the north. In his conception, the Islanders were mere servants in the enterprise of expanding the dominion of white people – and poorly paid servants at that. In the 1880s, McIlwraith’s sometime opponent, Samuel Griffith (premier 1883-86 and 1890-93) sought to end the labour trade but his efforts were frustrated by a combination of political expediency and the power of a business lobby with vested interests in maintaining a supply of cheap labour. At the time of federation, Pacific Islanders still comprised over eighty-five per cent of the workforce in Queensland’s sugar industry. The majority were deported under the Commonwealth’s Pacific Island Labourers Act 1901, which clearly signalled the ascendancy of the principle of white exclusiveness over the older conception of a white-dominated north.