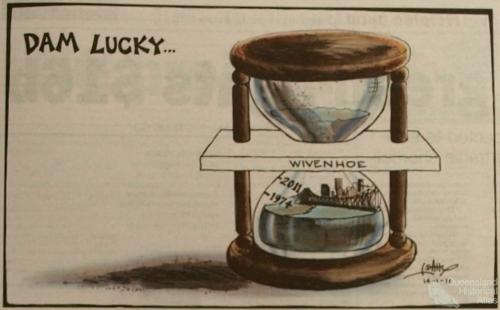 Dam lucky, 2011. This Leahy cartoon appeared in the Courier Mail days after the 2011 flood in Brisbane. On an adjacent page one Ormiston resident wrote in her letter to the editor, ‘A huge thanks should go to the engineers and other experts who controlled the Wivenhoe Dam outflows so well that Brisbane escaped an even worse flooding situation than what has occurred. Their expertise should be sought in advising on rebuilding public infrastructure on the riverbanks so it can cope if this happens again.’ From the Courier Mail, 14 January 2011