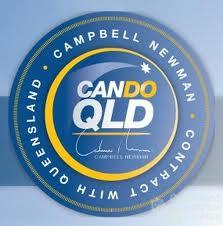 Can do Qld, 2012. The Liberal National Party offered a ‘contract with Queensland’ during the State election campaign in 2012. The document outlined a number of the LNP’s key election promises, and invited Queenslanders to use the ‘contract’ to hold the party to account if it won office. This harked back to a similar pledge made by National Party Premier Rob Borbidge in the mid-1990s, when he invited electors to ‘throw us out’ if his government didn’t live up to its promises.