Collection of the University of Queensland Library

150 miles to an inch
Depression era

Queensland public estate improvements, 1937. This map appeared in the annual report of the Land Administration Board and shows ‘improvements’ to the Queensland public estate made in 1937. Many of the ‘works in progress’ were facilitated by unemployment relief funds made available under the Income (Unemployment Relief) Tax Acts, 1930 to 1935. Works included building a road between Amity Point and Point Lookout on Stradbroke Island as well as new forestry access roads in northern Queensland: the Kirrama Range Road, Kuranda-McKenzie’s Pocket-Black Mountain Road and Robson’s Creek Road at Danbulla. Relief Funds were also used to fill in ‘unsightly’ swamps around coastal cities and towns. Land reclamation schemes were conducted around Cairns, Sandgate and Coolangatta. Major works such as these demonstrate how the Depression was a time of both survival and profound alteration to Queensland’s cultural landscape. Queensland parliamentary papers, vol 2, 1937

Aerial survey map west of Tully, 1936. In the 1930s, the rugged jungle country west of Tully presented numerous challenges for ground survey and remained ‘practically terra incognita’ as far as the Survey Office was concerned. Developments in aerial survey provided opportunities to examine large tracts of land and determine their value for exploitation. In 1936, Adastra Airways Ltd was contracted for the aerial survey of about 650 square miles. The company established its headquarters in Cairns and despite bad weather, succeeded in surveying approximately 560 square miles. Examination of the feature maps prepared from the photography revealed extensive scrub in the Tully and Jarra Creek valleys which had the potential for settlement. In this aerial mosaic, topographic features were highlighted including the Kennedy-Kirrama road under construction which would provide access to the valuable timbers in the Kirrama State Forest. This road was partially financed through unemployment relief funds made available during the Depression. Queensland parliamentary papers, Vol 2, 1936-37

Collection of the Queensland State Archives

Movement
Movement: how people move through the landscape

This map produced by the Main Roads Commission shows a comparison between the extent of roads and railways in Queensland, as at 30 September 1935. Roads are shown in solid line, with dotted line for railways. Collection of Queensland State Archives

The Great Depression of the 1930s, when economies crashed world-wide, had a devastating effect on people. 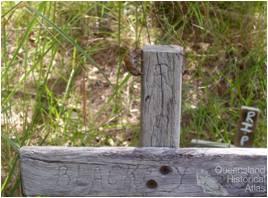 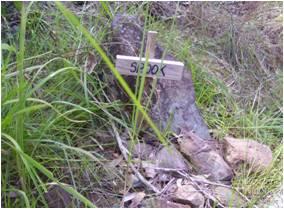 As part of the landscape of urban, regional and rural Queensland, roadside memorials remind travelers that death by road accident is both a condition and risk of enhanced human mobility. 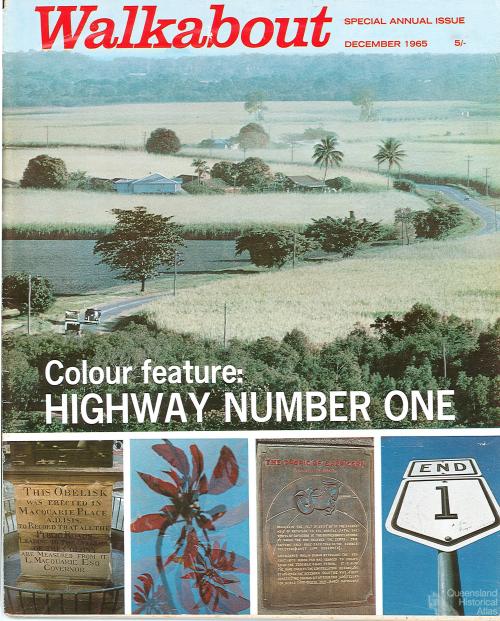 Our cover shows how Highway Number 1 takes on a tropical character through northern Queensland, cover image Walkabout, December 1965. Copyright Collection of the Centre for the Government of Queensland