The station homestead was an important landscape feature that assisted the establishment and survival of the Queensland pastoral industry and the community of people associated with the industry. 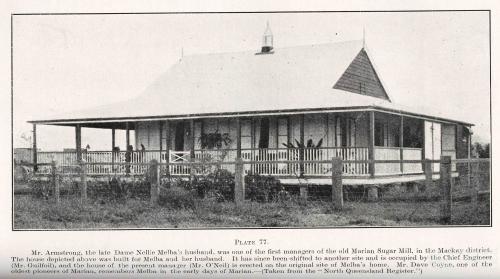 Dame Nellie Melba’s house, Marian, 1931. ‘Mr Armstrong, the late Dame Nellie Melba's husband, was one of the first managers of the old Marian Sugar Mill, in the Mackay district. The house depicted above was built for Melba and her husband. It has since been shifted to another site and is occupied by the Chief Engineer (Mr Guilford), and the house of the present manager (Mr O’Neil) is erected on the original site of Melba’s home. Mr Dave Coyne, one of the oldest pioneers of Marian, remembers Melba in the early days of Marian.

Collection of the Fryer Library, University of Queensland

The Dame in the tropics: Nellie Melba

The young ‘Nellie Melba’ moved with her family to Queensland in 1881, living around the Mackay sugar region until fleeing the tropics in 1883 to launch her singing career in Melbourne.